Alpha Phi Omega has designated the first week of November as National Service Week (NSW), in order to unify chapters under a national theme, inspire expansion of chapter service programs and increase the impact chapters have on the communities they serve.

National Service Day was expanded to a full week in 1996 and since then, APO brothers have performed service for a week each year reflecting a specific theme determined biennially at National Convention. 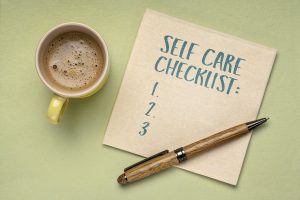 self care checklist – handwriting on a napkin with a cup of coffee, healthy lifestyle, habits and personal development concepts

The 2022-24 National Service Week Theme is Self & Community Care! Chapters are asked to unite under this theme as they seek ways to improve their communities through service.

According to the National Institute for Mental Health, self-care means taking the time to do things that help you live well and improve both your physical health and mental health. When it comes to your mental health, self-care can help you manage stress, lower your risk of illness, and increase your energy. Even small acts of self-care in your daily life can have a big impact. Click here for more information on self-care from NIMH.

Self & Community Care takes the concept of self-care and extends it to members of the surrounding communities. What can your chapter do to help fraternity, campus and community members live well and improve their physical and mental health?