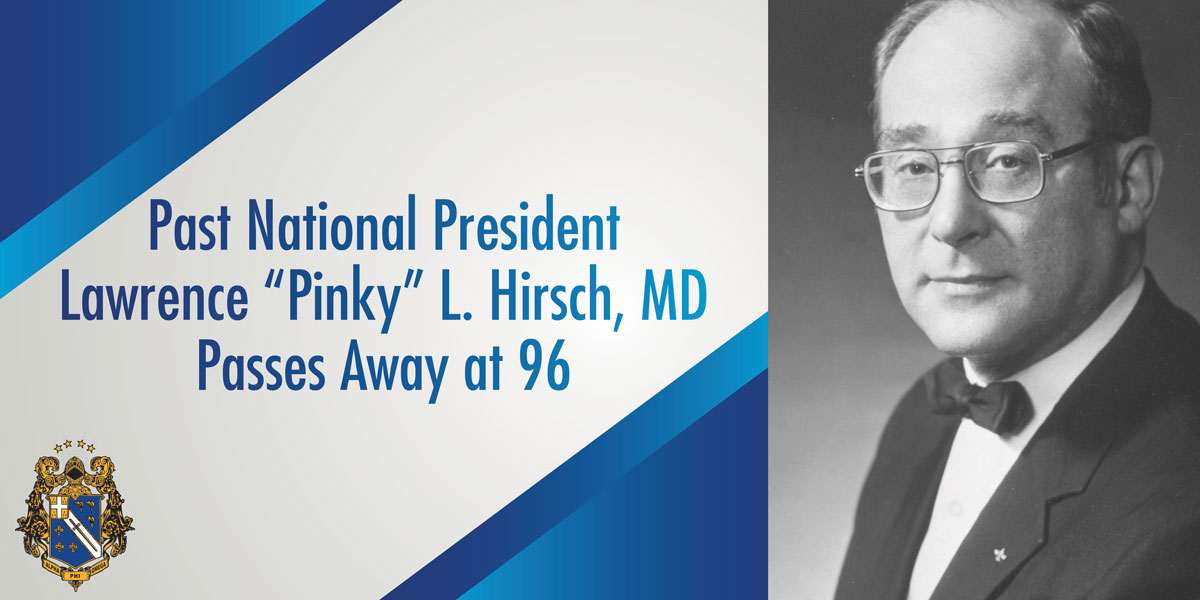 06 May Past National President Lawrence “Pinky” L. Hirsch, MD Passes Away at 96

Brother Hirsch’s relationship with APO spans back to 1940 when he was initiated into the Fraternity by Beta Gamma Chapter at Roosevelt University in Chicago. “Pinky” as he was affectionally known, was elected to the first of his two terms as the Fraternity’s President at the 23rd National Convention in St. Louis, in 1974. He also served one term as Vice President from 1972 to 1974. Brother Hirsch was a member of the Society of Life Members, a National Distinguished Service Key recipient and the 1981 Fall Pledge Class Namesake Honoree.

In an effort to strengthen the Fraternity, Pinky was a driving force during the 1967 Constitutional Convention in Norman, OK, which gave shape to the present National Bylaws and Articles of Association.

While sometimes appearing as a maverick, challenging the status quo, he always held the principles and ideals of the Fraternity in high regard. This was most frequently seen through his interaction with and influence on the Board of Directors. He would challenge an idea, and stimulate discussion and thought, while also being in agreement.

He always placed a high priority on the Fraternity and had been active professionally as professor emeritus at Chicago Medical School while carrying out his civic responsibilities as well. He served as president and chairman of the Chicago Medical Society Board of Directors; past president of the Illinois Academy of Family Physicians; served on several boards of directors and achieved the Standard of Fellow in several medical societies.

His credentials with the Boys Scouts of America are equally remarkable, including serving on the National Council and having received Silver Beaver, Silver Antelope and distinguished Eagle awards.

Brother Hirsch was preceded in death by his wife, Donna. He resided in Winter Garden, FL, and leaves behind a daughter, Sharon, and son, Ed, and several grandchildren.